United's Year Draws To A Close. 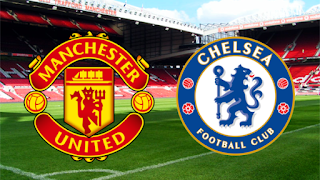 How the mighty have fallen.

If someone had said at the start of the season that by the time United host Chelsea in the last match of 2015 one would be stuck near the bottom and the other would have failed to win in their last seven games that person would have been locked in the madhouse and the key thrown away, yet here we were.

Down the years, this fixture has had an important bearing on the outcome of the Premier League with each side battling it out in some classic encounters. However, it was more about honour this time round than points. The bottom line was that for both teams this was a match that neither could afford to lose.

Louis van Gaal's United had the lost the previous four matches, three in the league, and in doing so raised question marks over the Dutchman's tenure as manager of the Red Devils. Chelsea's free fall from last year's glory saw them dispense with the services of their 'special one' as they sat in the precarious position just above the bottom three.

For such an important match van Gaal made a handful of changes from the depressing defeat away at Stoke on Boxing Day and his starting XI consisted of: De Gea, Darmian, Smalling, Blind, Young, Schneiderlin, Schweinsteiger, Mata, Herrera, Rooney and Martial.

Out went the dismal duo of Jones and Fellaini along with Carrick and Memphis and in came Darmian, Schneiderlin, Rooney and Schweinsteiger, whose steel had been sorely missed during his three-match ban.

United's intent to silence their detractors was there for all to see as early as the second minute when Mata let fire with a blistering strike from the edge of the area that rattled the visitors crossbar.

It was Chelsea's turn to come close when Terry tested De Gea with a header from a corner that the Spaniard acrobatically turned away. Five minutes in and already it was turning out to be a post- Christmas cracker.

Schneiderlin was the next to come close after Rooney had played the ball delightfully into his path, but his effort bent agonisingly wide.

After fifteen minutes it was all about the home side as they controlled all parts of the pitch in a way that hadn't been seen for many weeks, they just needed a goal to cement their commanding possession rate, but that's easier said than done based on their shyness in front of goal this season. 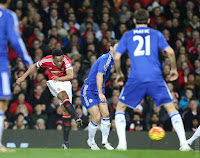 Next to come within a whisker of breaking the deadlock was Martial who, after some nifty footwork inside the area unleashed a low shot that beat keeper Courtois, but struck the bottom of the post when most in the stadium thought it was in. Including an excited Sir Alex Ferguson who was seen leaping out of his seat.

This was really exciting stuff from United and you wondered why they hadn't been in this form apart from when their backs are against the wall. They were not allowing Chelsea to spend time on the ball and showed a spirit that has been lacking recently.

There was a legitimate shout for a penalty to United as Martial seemed to have been clipped as he weaved his way towards goal but referee Atkinson waved play on. A close call to say the least.

Rooney was a different player in attack and was exerting the type of enthusiasm the faithful hadn't seen for ages and it was the captain who tested the keeper just before the half hour mark with a rasping drive that must have stung the keeper's palms.

The only downside was a yellow card picked up by Schneiderlin for a foul on Willian after a 50-50 challenge apart from that all was looking good for United. They just needed that all-important opener.

During the last ten minutes of the first half, the visitors saw more of the ball, but Smalling and Blind dealt comfortably with the threat of Hazard who continually dived to con the referee into winning free kicks and Smalling fell for his tricks by conceding a foul on the touchline and received a booking for his trouble.

Just before halftime Schweinsteiger obeyed the shouts of the crowd to shoot, unfortunately his strike from distance was always rising over.

Half-time and even though it had been United's best team performance for a long time it was still locked at 0-0. It was the same old problem of not being able to finish off the moves, having said that they did hit the woodwork twice and showed that they could play with width provided by Darmian on the left and Young down the right.

Chelsea were definitely there for the taking in the second half if only United could keep up the pressure.

United kicked off the second half attacking their favoured Stretford End with van Gaal wisely making no changes to the side that had performed so well in the first forty-five minutes.

It was Chelsea who laid down the marker at the start and it was that man between the posts who came once again to his side's rescue with De Gea making an outstanding double save first from Pedro then the follow up from Azpilicueta. Brilliant from undoubtedly the best keeper in the world.

United quickly regained control of the game with Rooney trying to pull the strings up front aided by the hard working trio of Martial, Mata and Herrera.

Hazard was by this time spending more time on his backside than on his feet.

There was almost the opener the home side craved after ten minutes as Martial delivered a superb cross from the byline that Herrera met in the six-yard box, but luckily for Chelsea the ball struck the keeper and it squirmed wide for a corner. The keepers were certainly being kept busy in this period.

Matic had the best chance of the half as he was played clean through only to let the rush of blood go to his head as he blasted his effort high, wide and handsome. It was a similar moment to the effort from Torres when the sides met before.

The home crowd rose to their feet in unison when it looked like Mata had been brought down inside the penalty area, however, not for the first time the official waved away the appeals of the players. So, with Hazard's antics and no decisions going United's way the referee was not making many friends in the stadium, apart from Chelsea's followers of course.

The first change made by van Gaal was in the 69th minute when he replaced Darmian with youngster Borthwick-Jackson. Hopefully, the young defender wouldn't be too overawed by the importance of the match.

At last, justice was forthcoming as Hazard was cautioned for a high tackle on Young.

The second change for United came in the 76th minute when Mata made way for Memphis. At this point, either side could have sneaked the win with United looking the most likely as Memphis almost connected with a cross by Young.

Schweinsteiger showed his commitment to the cause by receiving a yellow card for a professional foul to stop a certain break by Chelsea.

The last throw of the dice by van Gaal was to bring on Jones in place of Blind in defence for the final ten minutes of the match.

A brilliant interchange between Herrera and Borthwick-Jackson down the left wing ended when Rooney hit the young full back's deep cross over at the far post. Great play from the youngster which must have filled him with so much confidence.

In the end, a draw has to be a huge disappointment for United as they had played so well from the start and clearly had the appetite for the fight, but the same old problem rose its head and that is the end result. It's fantastic to watch breathtaking attacking football, but if you can't put the chances away then it amounts to nothing. At least the United players put in the effort and had to count themselves unlucky.

There were many players in red that worked hard for their manager. None more so than Ashley Young, who went about his job as a wing back with great gusto by mounting attacks combined with a couple of defensive interceptions that saved his team at vital moments.

Following the match there will be more calls for a change in management and that will be debated over social media for days to come. At least, the players attempted to right the many wrongs of late and pulled together as a team, which is more than can be said for the so-called fans who wore 'Mourinho United' scarves inside the Theatre of Dreams.

Thanks for reading and a Happy New Year to all.